The devil is in the details

My kids want to know where we got the story of the fall of the devil… how he was originally an angel and chose to stray… is this actually an Orthodox belief?  I couldn’t find it in the Bible… is it??

Sometimes in the Gospels, Christ mentions something in an aside that makes us stop and remember that this is the eternal God incarnate. One of those places is in Luke 10:18, where he says, “I saw Satan fall like lightning from heaven.”

Some of the passages the Church reads in that context are ostensibly about someone else. But just as the deliverance of Israel at the Red Sea was both a historical event and a prophetic image of baptism, the Church recognizes some meaningful lessons in passages like Ezekiel 28. Here Ezekiel is prophesying the fall of the king of Tyre — but he suddenly begins talking about another proud ruler who was brought down:

Son of man, take up a lamentation for the prince of Tyre, and say to him, ‘Thus says the Lord God; “You are a seal of resemblance, and crown of beauty. You were in the delight of the paradise of God; you bound upon you every precious stone, the sardius, and topaz, and emerald… and you filled your treasures and your stores in you with gold. From the day that you were created you were with the cherub: I set you on the holy mountain of God; you were in the midst of the stones of fire. You were faultless in your days from the day that you were created, until iniquity was found in you. Of the abundance of your merchandise you filled your storehouses with iniquity, and sinned. Therefore you have been cast down wounded from the mountain of God, and the cherub has brought you out of the midst of the stones of fire. Your heart has been lifted up because of your beauty; your knowledge has been corrupted with your beauty. Because of the multitude of your sins I have cast you to the ground, I have caused you to be put to open shame before kings. Because of the multitude of your sins and the iniquities of your merchandise, I have profaned your sacred things; and I will bring fire out of the midst of you. It shall devour you, and I will make you to be ashes upon your land before all that see you. And all that know you among the nations shall groan over you: You are gone to destruction, and you shall not exist any more.”’ (Ezekiel 28:12-19, LXX)

This is one of the passages in which the Church sees an image of the fall of Satan. The being that Ezekiel laments was “with the cherub… on the holy mountain of God… among the stones of fire.” That expression, “stones of fire”, is how Isaiah describes the presence of God the Consuming Fire, in Isaiah 33:14ff, asking who is righteous enough to dwell there?

The Hebrew version of Ezekiel’s lament, in v.14 and 16, calls this king “the anointed cherub who covereth” (KJV) which associates his original mission both with holy authority (anointing) and with the Jewish idea of atonement (covering). For more on this angelic being’s original purpose and his fall, we look at Isaiah’s prophecy, ostensibly regarding the king of Babylon:

And it will be in the day when the Lord gives you rest from your pain and turmoil and harsh service in which you have been enslaved, that you will take up this taunt against the king of Babylon: “How has the extortioner ceased, and the taskmaster ceased! The Lord has broken the yoke of sinners, the yoke of princes. Having smitten a nation in wrath, with an incurable plague, smiting a nation with a wrathful plague, which spared them not, he rested in quiet. All the earth cries aloud with joy… Hades from beneath is provoked to meet you: all the great ones that have ruled over the earth have risen up together against you, they that have raised up from their thrones all the kings of the nations. All shall answer and say to you, ‘You also have been taken, even as we; and you are numbered among us. Your glory has come down to hades, and your great mirth: under you they shall spread corruption, and the worm shall be your covering.’ How has the dawn-bearer, that rose in the morning, fallen from heaven! He that sent orders to all the nations is crushed to the earth. But you said in your heart, ‘I will go up to heaven, I will set my throne above the stars of heaven: I will sit on a lofty mount, on the lofty mountains toward the north: I will go up above the clouds: I will be like the Most High.’ But now you shall go down to hades, even to the foundations of the earth. They that see you shall wonder at you, and say, ‘This is the man that troubled the earth, that made kings to shake; that made the whole world desolate, and destroyed its cities; he loosed not those who were in captivity.’ All the kings of the nations lie in honour, every man in his house. But you shall be cast forth on the mountains, as a loathed carcass, with many dead who have been pierced with swords, going down to the grave. As a garment defiled with blood shall not be pure, so neither shall you be pure; because you have destroyed my land, and have slain my people.“ (Isaiah 14:3-20, LXX)

English versions usually use either “Lucifer” or “star of the morning” to translate the word Isaiah uses in v.12. In Hebrew it’s hêlêl which comes from a root for praise, glory, shine, celebrate; from the root of this word we get “Hallelu Jah,” the command to exuberantly praise the Lord. This was also anciently the name for the morningstar, Venus, which shines brighter than any other “star” in the morning sky. The Septuagint renders this name with eophoros (dawn-bearer) and Jerome brought that into Latin as lucifer (light-bearer.) Lucifer isn’t a proper name, it’s just Isaiah describing how brightly this being used to shine.

In his Revelation, St. John the Evangelist presents so many figures and images at once that it’s hard or impossible to separate them into past, present, and future. Without trying to interpret too deeply, we can see in Revelation chapter 12 an image of the fall of Satan:

And another sign appeared in heaven: behold, a great, fiery red dragon having seven heads and ten horns, and seven diadems on his heads. His tail drew a third of the stars of heaven and threw them to the earth… And war broke out in heaven: Michael and his angels fought with the dragon; and the dragon and his angels fought, but they did not prevail, nor was a place found for them in heaven any longer. So the great dragon was cast out, that serpent of old, called the Devil and Satan, who deceives the whole world; he was cast to the earth, and his angels were cast out with him. Then I heard a loud voice saying in heaven, “Now salvation, and strength, and the kingdom of our God, and the power of His Christ have come, for the accuser of our brethren, who accused them before our God day and night, has been cast down. And they overcame him by the blood of the Lamb and by the word of their testimony, and they did not love their lives to the death. Therefore rejoice, O heavens, and you who dwell in them! Woe to the inhabitants of the earth and the sea! For the devil has come down to you, having great wrath, because he knows that he has a short time.”  Now when the dragon saw that he had been cast to the earth, he persecuted the woman who gave birth to the male Child…

John explicitly calls this fallen heavenly being “devil” (diabolos = false accuser) and Satan (Hebrew for “enemy”) and tells us the devil is on earth. He’s not in “the everlasting fire prepared for the devil and his angels” (Matthew 5:41) and he’s certainly not ruling in hell as Milton and popular mythology would have it.

At the end of this age we know that the devil will be thrown into the lake of fire (Revelation 20:10.)  Until then, our “adversary the devil walks about like a roaring lion, seeking whom he may devour” (1 Peter 5:8) but “greater is He that is in you, than he that is in the world” (1 John 4:4), so “submit to God. Resist the devil and he will flee from you” (James 4:7).

On the Sunday of the Last Judgment 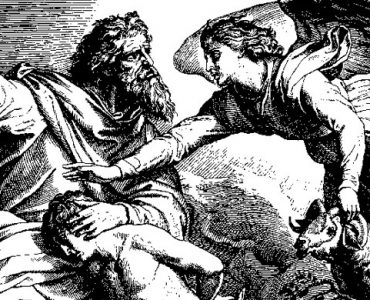 How is the story of Abraham and Isaac a moral example? 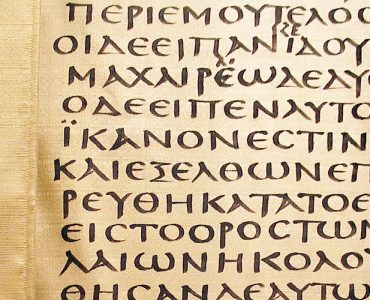 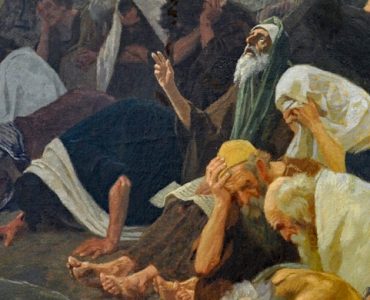 I can taste it!

When the faeries have a garden party